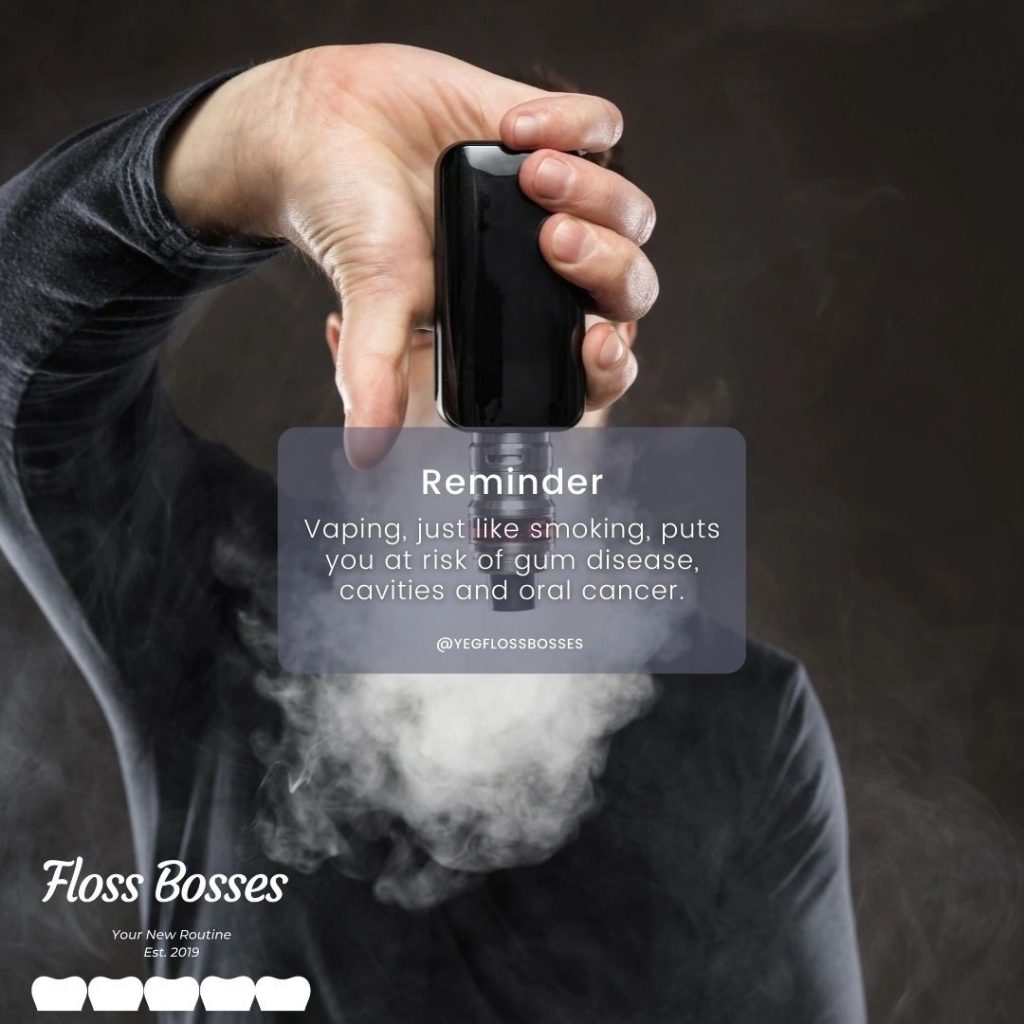 For those who don’t know, it is “the act of inhaling and exhaling the aerosol, often referred to as vapor, which is produced by an e-cigarette or similar device.

When inhaled, the aerosols are absorbed to the blood stream in the lungs. The residual product is exhaled through the mouth. Many of these particles contain varying amounts of toxic chemicals, which have been linked to cancer, as well as respiratory and heart disease” (Center On Addiction).

Public has been made to believe vaping is a safer form of smoking. It is advertised as a cigarette quitting tool. Wikipedia states the marketers target not only to smokers but the non-smokers and children as well. They are spending their money to maximize the number of long term users.

Why not start them early on this harmful habit? E-cigarette companies use pseudoscience health claims that e-cigarettes are a better version than smoking. Lets remind ourselves the same trick was used when traditional cigarettes where being promoted by tobacco companies in early 1900s.

Here in Edmonton, I have seen advertisements like “Want to Quit smoking Start Vaping.” They claim there are benefits to vaping like: it’s safer than smoking, no tar or ash is associated with vaping, smoke free, better oral hygiene, better skin health, and circulation, better lung capacity and improved sense of smell.

What is in the e-juice? The mixture is quite complicated. Besides nicotine, highly addictive substance causing many diseases, it also contains chemicals like Propylene Glycol  (safe when ingested but not enough research done if safe when inhaled), Vegetable Glycerine (used in food & toothpaste). In addition, e-juice also contains Diacetyl (flavorant; popcorn Lung) & Formaldehyde (yes, the stuff used to preserve dead specimens) both linked to lung diseases & cancers.

E-juice comes in multitude of flavours that may be enticing to young people and children. E-juice containers are marketed so they appear harmless & resembling a juice box. Flavourings alone can be harmful. They may cause DNA damage and kill cells lining blood vessels. Menthol and cinnamon flavoured e-juice have been shown to be the most harmful.

E-juice has been found to contain toxic metals like lead, chromium, nickel, as well as arsenic. Breathing this in has been linked to lung, liver, immune system, and brain damage, as well as several cancers. A lot of consumers add THC to the liquid, as well, which in itself has some serious effects on our health.

Let’s talk about some of these so called benefits mentioned by promoters of vaping.

ORAL HEALTH: Vaping makes your eyes and mouth more dry. In turn, this vape induced Xerostomia puts you more at risk of gum disease, cavities and oral cancer. Propylene Glycol breaks down into acetic acid, lactic acid and propionaldehyde, which are all toxic to enamel and soft tissue of the mouth. Because PG is also a hygroscopic product (water molecules and saliva bind to it), leading to xerostomia which increases the risk of gum disease (periodontitis) and cavities. Vegetable Glycerin, in combination with liquid flavourings, may produce a 4 fold increase microbial adhesion to tooth enamel and 2 fold increase in biofilm formation (plaque). VG also decrease the hardness of the enamel by 27%, therefore, increase in tooth decay. In addition, nicotine has been shown to increase risk of gum disease and oral cancer.

BRAIN HEALTH: This is especially important for the young ones that are curious about vaping. Brain development continues until the age of 25. At this stage, brain is highly sensitive to chemicals in e-juice. Nicotine has a massive effect on developing brain. It disrupts brain growth, having an effect on learning and thinking skills. It’s been also linked to depression and schizophrenia.

IMMUNE SYSTEM: our defence system that fights germs is weakened by vaping, therefore, it has a challenging time fighting for our health.

PHYSICAL INJURY: The Birmingham Medical Journal estimates that between 2015-2017 there were 2035 visits to the US hospital emergency departments for injuries related to e-cigaretttes. Explosions, burn injuries and poisonings are to name a few. In October 2019 alone, in the US, there have been 1300 lung injuries and 26 deaths related to vaping. In November, in Canada, we’ve had our very own case of popcorn lung. A 17 year old boy has been vaping everyday for 5 months before he developed this lung disease. He had used flavoured e-cigarettes laced with THC.

All of a sudden, website searches for e-cigarette sites, in China, revealed slim to none options. As if overnight, thousands of on line shops disappeared. On Nov 7th, Chinese authorities imposed a BAN on e-cigarettes. A BAN !!! They issued an order “discouraging” on-line sales to protect children from hazards of smoking. This is all to damage control the outbreak of diseases related to e-cigarettes especially flavoured and THC oils infused.

Economically, “China is the world’s biggest manufacturer & exporter of e-cigarettes (the China Electronic Cigarette Chamber of Commerce). In 2018, more than 2 million people worked in the industry, with annual sales worth £3.7 billion and exports worth £3.2 billion. In Shenzhen, a city just north of Hong Kong, about 90% of the world’s vaping and e-cigarette devices are designed and manufactured in about 1,000 factories. Thousands more companies form the supply chain throughout Guangdong province and China” (The Guardian).

Where do we go from here? If you have never smoked, do NOT start vaping. The chemicals like nicotine and THC are highly addictive. Please educate your youngsters. Vaping is NOT cool. The packaging and flavours are very enticing. Vaping is very dangerous to their mental health. Vaping, especially flavoured and/or THC added, puts them more at risk of developing depression, schizophrenia, lung and heart conditions. Vaping should never be introduced as means to quitting smoking. E-cigarettes normalizes smoking. In some cases it works in reverse, users graduate to traditional smoking and dual use.

We need to  focus and maintaining control efforts of any form of nicotine and tobacco products. In 2001 the government of Canada introduced the Federal Tobacco Control Strategy (FTCS). In 2002, The Alberta tobacco Reduction Strategy (ATRS) was formed. These two strategies have been very successful in reducing smoking rates. In 2015 smoking prevalence hit all time low of 13%. In more recent measures, there has been a noticeable spike in smoking to 15% (federal) and 19% (Alberta) in persons age 15 and older. Tobacco control is loosing ground in Canada and especially so in Alberta.

There are still many unknowns about this product. Many more studies are necessary to really know the true risks. Lets stay informed and educated! I believe in teaching our younger generation not to become sheep and not to follow trends that may harm them and their future.

What we can do as adults is to listen to our kids because …prevention is the best tool.